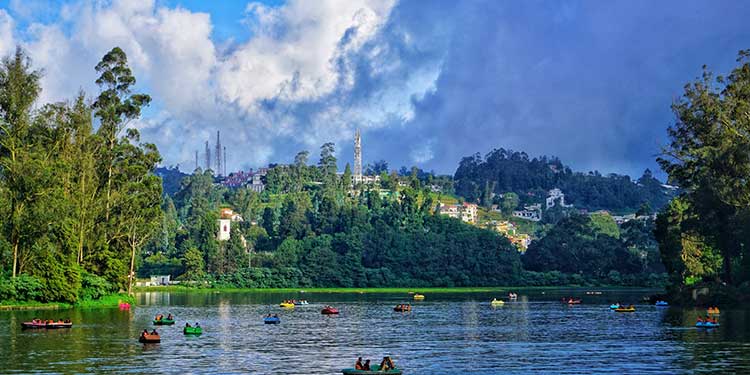 Ooty Lake elegantly stretches along for about 2.5 kilometers long and varying in its wideness just behind the Ooty Main Bus Central Stand which is situated close to the Ooty Railway Station. Seen in an irregular 'L' shape, this stunning lake captures the focal centre point of Ooty and its tourism sector that attracts thousands of tourists and visitors to Ooty all-year-round.

Ooty Lake is manmade which was constructed in 1824 by John Sullivan, the first collector of Ooty or rather the founder of this quaint Hill Station who was instrumental in developing Ooty as a Summer Resort Destination for the British and Europeans during the colonial times and today, has become one of the most sought after Tourist Destination in the World.

The Ooty Lake was initially established with the intention of constructing an irrigation tank. This concept was changed to converting the idea of a water tank into a Lake for fishing purpose and to transport people via ferries across the town.

In order to construct this lake, the mountain streams that cascaded along the Ooty valley, was dammed and the land dug out to form a large quarry measuring a good 2 kms and with varied width size owing to the natural contours of the Ooty Valley. After its completion, the Ooty Lake was extensively used for fishing purpose as a sport and fun activity for the Europeans to indulge in as a pass-time, during the Colonial period.

European and British Families would gather around the Ooty Lake for picnic lunches and enjoy the spectacular sights of the Ooty valley and its verdant surroundings during a bright and pleasant sunny day while the kids would play around. However, the Lake did not last very long as it gradually shrunk and decreased in size that made way for the present Ooty Bus Stand, Ooty Race Course and the Ooty Lake Park.

The Ooty Lake also shrunk during several occasions since then and especially three times when its embankment was severely breached. After the Europeans and British abandoned Ooty, the Ooty Lake was left unattended up till 1973 when the Tamil Nadu Tourism Development Corporation took charge of the Lake on behalf of the Tourism Department and reconstructed the entire Ooty Lake measuring approx. 2 kms in length, though with its width varying at regular intervals and hence capturing an overall area of about one and a half square miles.

Today, the present Ooty Lake is seen intact and extends right up to the Ooty Market despite continuous concerns with the rapidly escalating weeds also known as the water hyacinth plant species. The Tourism officials of PWD [Public Works Department] are in continuous work to keep the Lake clean and free from these weeds. Surrounded by groves of Eucalyptus trees, the Railway track runs along one side of the banks of the Ooty Lake lending one of the most unforgettable sights to witness and experience.

It was since 1973, when the Ooty Lake took the centerpiece position of Ooty and became highlighted as one of the major tourist attraction of Ooty. The Tourism Department took special care to convert this Lake into a tourist hub for locals, visitors and tourist to enjoy by introducing boating facilities.

The Ooty Lake became even more renowned after the Tourism Department established the quintessential Boat Houses situated towards the far end of the Ooty Lake. The Boat Houses are lined with different types of boats in bright and vibrant colours thus lending a colourful canvas to the already scenic surroundings of the Ooty Lake.

The serene stretch of the Ooty Lake allows for an enjoyable boat ride experience with the added advantage of getting a chance to admire the real beauty of the picturesque Ooty Valley dressed with lines of eucalyptus trees that lends an intense glow of green and fresh look to the region. Padded Boats and Rowing Boats were introduced and made available for people to use, especially the ones who thoroughly enjoy to row along the extension of the Ooty Lake. These boats are available for hire on a daily basis from 8:00 AM to 6:00 PM.

In case boat rides are not available, the Boat Houses act as a perfect haven for people to stay in, sit back, relax and enjoy the scenes of Ooty and at the same time get the true experience of residing in an actual boat house. Towards the end of the Boat House is a Children Park, also referred to as the Ooty Children Park where kids can enjoy a fun toy train ride or play around with their friends.

Adjacent to the Ooty Children Park is the Ooty Deer Park and a kilometer away is the mini-garden, also referred to as the Children's Lake Garden which lies towards the end of the Ooty Bus Stand and is seen with well established pathways encircling the entire Lake allowing for fun pony rides along the Ooty Lake, though at a reasonable charge. All these tourist spots in are maintained and operated by the Tamil Nadu Tourism Development Corporation Limited [TTDC].

The Ooty Lake, hence, became one of the most visited places in Ooty, especially thronged by the Locals during the weekends who would visit the Lake for boating activities and to enjoy the sights. During the summers, the Ooty Lake would be infested to the brim with several boat rides and boat races being organised to entertain the crowd.

Despite the intense crowd during the summer season, boat races and boat pageantry are organised in the Ooty Lake for two continuous days during the month of May wherein the function is well planned accompanied with great festivities and fun elements introduced to lure in visitors and tourists as well.

Today, Ooty Lake has emerged as one of the paramount tourist attractions in Ooty and a major entertainment hub giving apt reasons for a large number of tourists and visitors to flock to this picturesque hill station all-year-round especially during the pleasant summer months of Ooty.

The Summer Peak Tourist Season in Ooty also calls for fun activities apart from Boat rides such as angling or fishing which is allowed at the Ooty Lake and several other Lakes dotted around the Nilgiris region. This is one of the attractions that lure even a more inflow of tourists and visitors to the Ooty every year. Though Fishing is allowed at Ooty Lake, prior permission is required to be obtained from the Tourism Authorities.

Beside the Ooty Lake is a snack bar, also operated by TTDC, where you can enjoy snacks and soft drinks after a fun boat rides or jolly pony rides.

Ooty Lake does add to the attraction of Ooty Hill Station perched at an altitude of 7,620 feet above MSL. Visitors of all ages get an opportunity to enjoy fun vacation through boating and related activities and in particular, the children who can spend a memorable summer holiday enjoying rides on local ponies within an overall pleasant ambience around the Ooty Lake.