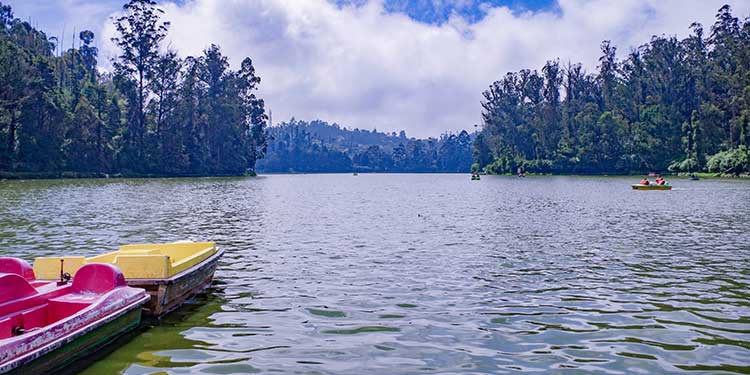 Ooty is home to multitudinous scenic and adventurous facets that mark this Hill Station as a unique and distinct tourist destination filled with unadulterated natural beauty and undulating lush green landscapes making way for numerous tourist spots and sights to see. It is laden with vibrant orchards filled with the freshest of fruits and vegetables including a host of colourful blossomed flowers lending an aromatic and calm environ fit to stimulate your senses.

Attractions in Ooty lend the best and memorable vacation to all visitors owing to its unassuming verdant mountain ranges that transform Ooty into one of the best hill resort destination worth exploring. Ooty beckons tired souls and minds to its abode thus offering a range of choices to relax, enjoy and experience the true meaning of nature at its best.

Ooty sightseeing tours will take you through the tranquil and serene confinements and mesmerizing beauty that city dwellers can only hope for. It gives visitors a chance to explore the unexplored and unmanned terrains of pure natural charm of a hill station like Ooty including its surrounding areas.

The numerous Ooty tourist places to visit in Ooty are a reason that people should visit this quaint hill station tucked away far from dirt, dust and pollution. Ooty sightseeing tours is sure to offer people with the opportunity to experience its exquisite nature, green landscapes, majestic mountains, cascading waterfalls and gorges and sparkling streams that all make Ooty a delight for sore eyes.

Sightseeing in Ooty is the best way to explore this splendid and ideal hill station that homes some of the best sights to see and take back home fond memories to cherish.

The Ooty Botanical Gardens is a must visit for all visitors in Ooty. It was established on 1847 as a scenic expanse of land to add to the existing Tourist spots in Ooty. The Botanical Gardens is one of the most picturesque venues in Ooty and is well maintained by the Horticulture department of Tamil Nadu. The garden covers an area measuring approximately 22 hectares and is home to beds of over 650 species of trees, plants and a fossil of an ancient tree believed to be over 20 million years old, a definite must-see. read more about Ooty Botanical Gardens

Ooty Lake is the nodal and prime attraction set within the heart of Ooty. It captures a massive area of 65 acres and was established by John Sullivan, the first Collector of Ooty way back in 1824. The historical Ooty Lake was initially used by the British Colonies to fish and was later converted by the Government of Tamil Nadu into a major Tourist spot in Ooty. The Ooty Lake attracts a number of tourists looking for joy boat rides and boating facilities within the region of Ooty enjoying its expanse and verdant surroundings. read more about Ooty Lake

St. Stephen's Church is situated in Ooty but on the road leading to Mysore in the Tamil Nadu State of India. This Church is renowned for being one of the oldest churches to be established within the Nilgiris district during the British rule in India. St. Stephen's Church dates back to the 19th Century during when its establishment was spawned by an idea conceptualized by Stephen Rumbold Lushington, who was the former Governor of Madras. The plan to construct a Church took notice with the aim to cater to the British settled in Ooty during that period. The architect in charge was John James Underwood, who was then the Captain of the Madras Regiment stationed in Ooty. read more about St. Stephen's Church in Ooty

Stone House is the residence of John Sullivan and hence the first bungalow to be constructed in Ooty. It was built in 1822, during an era in India, when Ooty was only graced by the indigenous Tribal inhabitants living in small Toda Huts and living a life of simplicity and farming activities. Made of stone, this bungalow was aptly named as the 'Kal Bangala' by the Toda Tribes where 'Kal' means 'Stone' in the Tamil Language. read more about Stone House in Ooty

Toda Huts are the residences of the indigenous Toda Tribes in Ooty who can be seen dwelling over the hills placed right above the stunning Botanical Gardens lending one of the most spectacular scenic sights from that attitude and thus adding to the list of Tourist Attractions in Ooty. While most of the Toda Tribes have abandoned these dwellings, a few of these Toda Huts have been renovated and retained by the Tourism Department of Ooty to lure in more visitors and provide a platform for tourists to learn and get an insight into the true dwellers and original people of Ooty and their way of life. read more about Toda Huts

Ooty Golf Course is situated within the town of Ooty and perched at a height of over 7,000 feet extending over 193.56 acres comprising of 18 holes. It is placed just a few degrees above the equator thus lending the perfect combination of light and cool air for a good game of Golf. Owned by the Gymkhana club in Ooty, the Ooty golf course might not be as scenic as most tourist attractions in Ooty, but it sure offer an apt atmosphere for members to enjoy a quiet game during the weekend with friends or colleagues. read more about Ooty Golf Course

The Tribal Museum is situated at a distance of about 10 kms from Ooty. It is in fact situated within the campus of the Tribal Research Centre in Muthorai Palada and is home to a collection of rare artifacts and photographs of the Tamil Nadu, Andaman and Nicobar Islands Tribal groups including primitive human culture and heritage aspects of anthropological and archaeological significance. read more about Ooty Tribal Museum

Ooty Centenary Rose Gardens, as the name suggest, is one of the popular tourist spots in Ooty set amidst an amazing and massive area comprising of varieties of roses, a definite sight to see. During the 2 to 3 months in a year, when these roses bloom, the entire valley is transformed into a haven of colourful and aromatic territory which is a must-see. read more about Ooty Centenary Rose Gardens

The Wax World or Wax World Museum & Art Gallery in Ooty is a private holding and is not supported by the Government of Tamil Nadu. The wax Museum is home to a wide collection of life-size replicas of wax statues that links to the History of India, its heritage and culture. read more about Wax World Museum

The Tea Museum in Ooty is a venue where a number of tea gardens and factories have been set up to cater to visitors and tourists and also provide a source of livelihood and income for the wide population of people in Ooty by working in the tea factory. This factory is known to produce tea of varied quality and type and is sold to major International markets as well as local tea industries. The assurance is excellent taste emanating with freshness and high quality that one must savour during their visit to this Tea Factory. read more about Tea Museum

Hindustan Photo Films or HPF in short, is a public sector enterprise and one of the major industrial units of the Nilgiris district located at a distance of approx. 5 kms from the Ooty Railway Station. It spans over a massive area measuring over 300 acres and lies in close proximity to the famous but serene Ooty Golf links situated on the road leading from Ooty to Mysore. read more about Hindustan Photo Films

The Deer Park in Ooty is situated approx. a kilometer away from the famous L-shaped Ooty Lake. It homes a variety of animal species such as the Chital, Hares and the famous Sambar Deer from where the park derived its name. Water birds also frequently use this park as a perfect sanctuary and its water bodies to feed and breed. This wildlife park in Ooty spans over an area of 22 acres and is frequented by tourists and visitors every year. It is a hot tourist spot in Ooty and is apparently famous as one of those few high-altitude wildlife sanctuaries in India. read more about Deer Park

The Thread Garden is a popular tourist spot in Ooty that exhibits a collection of some of the most attractive artificial plants and flowers made by experts and skilful artists just by using thread, a unique and distinct art and craft seen only in Ooty. Over the past 12 years, artists have constantly strived to come up with unique ideas and innovative creations to weave these threads into masterpieces. read more about Thread Garden

Ooty Palaces or Palaces in Ooty stand as testaments of the ancient historical and heritage wealth of Ooty. Many Rulers of several Princely States such as Jodhpur, Mysore, Hyderabad and Vadodara have built their Summer Palaces in Ooty to get away from the scorching summer heat of the plains. The Arranmore Palace which was constructed by the Maharaja of Mysore and recently renamed as the Thamizhagam Palace is now used as a Government Guest House attracting a large pool of history enthusiasts to Ooty. The Maharaja of Jodhpur constructed another Summer Palace by the name of Annandale, also used as a Hotel in Ooty. The stunning and beautiful Swiss-architecture inspired villa known by the name of Fernhill Palace is an 18th Century Palace, also constructed by the Maharaja of Mysore that adds to the Heritage charm of Ooty. This Palace is now transformed into a Heritage Hotel owned under the flagship of WelcomHeritage group. You can also enjoy the sights of other Palaces in Ooty such as the Baroda Palace and the Elk Hill House. read more about Ooty Palaces